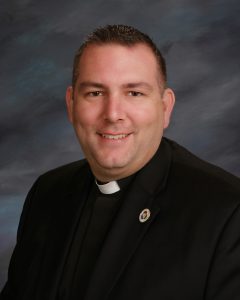 Pastor Tucher was born in Indianapolis, Indiana. He graduated from the University of Indianapolis in 2001 with a Bachelor of Arts in Religion and Bachelor of Arts in French. Following his undergraduate education, he then attended Concordia Theological Seminary from 2001-2005. He served his vicarage at Trinity Lutheran Church in Evansville, Indiana from 2002-2003. He graduated in 2005 with a Masters of Divinity and was called to serve Trinity Lutheran Church in Gillette, Wyoming as Assistant Pastor. He served as Assistant Pastor from July 2005 – August 2011, when he was called to serve as Sole Pastor, where he continues to serve today.

Pastor Tucher is married to Gwen and they have four children: Wesley, Bryce, Maizie and Reid.

Service to the Church